The Buffalo nickel or Indian Head nickel is a copper-nickel five-cent piece that was struck by the United States Mint from 1913 to 1938. It was designed by sculptor James Earle Fraser.

As part of a drive to beautify the coinage, five denominations of US coins had received new designs between 1907 and 1909. In 1911, Taft administration officials decided to replace Charles E. Barber's Liberty Head design for the nickel, and commissioned Fraser to do the work. They were impressed by Fraser's designs showing a Native American and an American bison. The designs were approved in 1912, but were delayed several months because of objections from the Hobbs Manufacturing Company, which made mechanisms to detect slugs in nickel-operated machines. The company was not satisfied by changes made in the coin by Fraser, and in February 1913, Treasury Secretary Franklin MacVeagh decided to issue the coins despite the objections.

Despite attempts by the Mint to adjust the design, the coins proved to strike indistinctly, and to be subject to wear—the dates were easily worn away in circulation. In 1938, after the expiration of the minimum 25-year period during which the design could not be replaced without congressional authorization, it was replaced by the Jefferson nickel, designed by Felix Schlag. Fraser's design is admired today, and has been used on commemorative coins and the gold American Buffalo series. 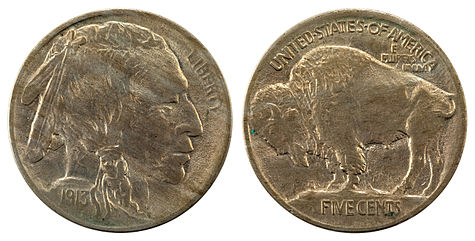