The Barber coinage consists of a dime, quarter, and half dollar designed by United States Bureau of the Mint Chief Engraver Charles E. Barber. They were minted between 1892 and 1916, though no half dollars were struck in the final year of the series.

By the late 1880s, there were increasing calls for the replacement of the Seated Liberty design, used since the 1830s on most denominations of silver coins. In 1891, Mint Director Edward O. Leech, having been authorized by Congress to approve coin redesigns, ordered a competition, seeking a new look for the silver coins. As only the winner would receive a cash prize, invited artists refused to participate and no entry from the public proved suitable. Leech instructed Barber to prepare new designs for the dime, quarter, and half dollar, and after the chief engraver made changes to secure Leech's endorsement, they were approved by President Benjamin Harrison in November 1891. Striking of the new coins began the following January.

Public and artistic opinion of the new pieces was, and remains, mixed. In 1915, Mint officials began plans to replace them once the design's minimum term expired in 1916. The Mint issued Barber dimes and quarters in 1916 to meet commercial demand, but before the end of the year, the Mercury dime, Standing Liberty quarter, and Walking Liberty half dollar had begun production. Most dates in the Barber coin series are not difficult to obtain, but the 1894 dime struck at the San Francisco Mint (1894-S), with a mintage of 24, is a great rarity. 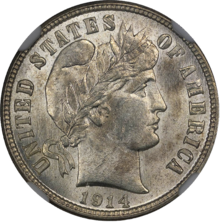