New Walking Liberty half dollar Rare Collection Series【Hot sale】
16.90
Have a Coupon code?
Sign in Coupon code applied will be stored on your account
Subtotal
Shipping calculated at checkout.

The Walking Liberty half dollar is a silver 50-cent piece or half dollar coin that was issued by the United States Mint from 1916 to 1947; it was designed by Adolph A. Weinman, a well-known sculptor and engraver.

In 1915, the new Mint Director, Robert W. Woolley, came to believe that he was not only allowed but required by law to replace coin designs that had been in use for 25 years. He therefore began the process of replacing the Barber coinage: dimes, quarters, and half dollars, all bearing similar designs by long-time Mint Engraver Charles E. Barber, and first struck in 1892. Woolley had the Commission of Fine Arts conduct a competition, as a result of which Weinman was selected to design the dime and half dollar.

Weinman's design of Liberty striding towards the Sun for the half dollar proved difficult to perfect, and Treasury Secretary William G. McAdoo, whose department included the Mint, considered having Barber create his own design. Mint officials were successful in getting Weinman's design into production, although it never struck very well, which may have been a factor in its replacement by the Franklin half dollar beginning in 1948. Nevertheless, art historian Cornelius Vermeule considered the piece to be among the most beautiful US coins. Since 1986, a modification of Weinman's obverse design has been used for the American Silver Eagle, and the half dollar was issued in gold for its centennial in 2016.

Mint marks D, S. Located for 1916 and some 1917 pieces on obverse to right of Liberty just under the letters "Tr" in "In God We Trust", later issues on reverse at lower left, under the tree. Philadelphia Mint specimens lack mint mark.

Design A bald eagle rising from a mountaintop perch 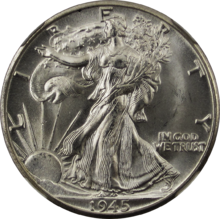 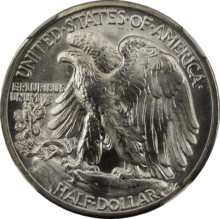